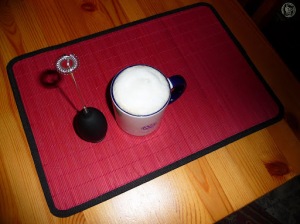 I am so not one for kitchen gadgets. Like most people out there I have had my share of useless kitchen gadgets and for me in all honesty most of them really are are useless. The fanciest thing in my kitchen is my crockpot (which has been pumpin’ non stop for about a month now with this cold)!
One day out of the blue I picked up these two things from London Drugs (which was really unlike me). I am not a fan of shopping to begin with, and useless kitchen stuff is about the last thing I’ll buy. But to my delight I have been using both of these items every single day! One is a milk frother (under $5). And the other is a rice cooker ($14). The rice cooker is something that I would have deemed completely useless (although I do have a girlfriend who swears by hers). And now I can see why!
I love it and it makes every single type of rice and whole grain perfectly (and it steams veg too). It shuts off automatically too. I just wanted to share because I am using both of these things every single day, and both of them together are under $20 bucks. Yup, cheap thrills 🙂